Eva Moir has a minion!

This pet has been nominated for the Pet Spotlight!

Name: When said together comes off sounding like Evermore. Pronounced separately her name reads: "Eh-vuh Moy-er"

If there ever was a way to begin a life uniquely with courage then Eva was the definition of such a beginning. As far as wolverines go, Eva, with her creamed fur and pale eyes, looked drastically different from the others in her litter and even her mom. Yet somehow she seemed suited to a mostly solitary life in the frigid arctic regions of the world.

One day while she was wandering through the cold forest in late fall, just after an icy snow storm had left crystal clear frozen statues all over everything, she heard a faint clinking noise. Eva stopped and hunkered down low, using her off-white fur to blend into the iced snow-covered ground. After several moments of listening and silent breathing, she realized the clinking did not mean the presence of something dangerous. The taste of the air was clear of anything, not even a scrumptious morsel of food was nearby.

Eva began walking, following the sound as it led her into a thicker stand of trees in the forest. Glistening shards of ice were dangling from most of the branches. Glittering frozen snow was illuminated by the sun as it filtered through the thickening canopy. As she walked under a low set branch, the clinking sound echoed through the glassy ice all around her.

When Eva walked deeper into the now darkening thick forest she caused motes of ice to stir up and suspend in the air. A thick frozen mist came from the ground and began huddling on trees, scurrying up the trunks to escape to the sky above. Darkness seeped from the branches like sap that dripped on the ground in thick hot splashing rain. Eva dashed towards a tree that had loose snow at its trunk and tried to dig into it, to shelter herself from this strange hot tarry void, but the snow she removed with her claws revealed a pink glowing mass that smelled faintly like sweet flowers.

‘None of this was right,’ she thought, as she desperately looked for a way to escape. The tree trunks were now frozen slicks, while the mist had crystalized on its way up. ‘If only I’d have known then and been able to escape,’ she thought.’ I should have followed the mist out.’ But it was too late for Eva to escape the same way of the mist.

Eva felt the dark hot stuff fall in drips on her shoulder and back, and where it touched her, it burned inside her body. It sent fiery pain through her body in sharp jolts that sent her limp to the ground.

“Eaaaaah!” Eva called out in helpless agony as pain rippled through her body. She staggered to her feet running towards the clinking that had still not ceased its whispering chant. When she began to think of it as a chant and not merely an annoying sound, it didn’t matter, yet now all she heard was a chant of some sort.

The trees were encased in ice and the dark bleeding poison that dripped continually behind Eva as she ran. The crystals overhead clanged louder as they shook the accumulated oozed darkness from their angled surfaces. Ahead, there was a frozen cave in the snow. ‘It may be an abandoned burrow,’ Eva thought, ‘or not.’ She didn’t have time to think. Eva dove in and slid to a stop on ice that was slicker than it should be. She regained her bearing quickly, turning to look at the cave entrance. The black muck was pouring down all around outside. “Looks like I’m stuck here,” She whispered to herself, half scared out of her mind; half already too scared to think straight.

Eva’s heart had been thumping so loudly that it had been silencing all other noises coming in, making her unaware that the crystal chanting was still eerily singing away.

Quite suddenly, the clinking chant stopped.

Eva looked around her a bit stunned, not sure why the noise had stopped. The inky rain was still sizzling on the cold ground outside, but all else was quiet. At the cave entrance appeared a small cloud of misty crystallized pinkish blue fluff. Eva stepped a bit closer and sniffed, but there was only that same scent of sweet flowers all around the fluff. Eva decided to try to blow the fluff out of the cave, just in case it was dangerous, but when she blew on it, the thing did not move. Instead the fluff turned into a hard round ice-shell of some sort.

After some time, Eva walked up to the shell and touched it with her claws, when it did not harm her she nudged it. The ice object fell on its side and broke with a soft crackling sound. The sound grew in a cascade of chanting and confused crystalized screams until Eva was laying on the ground covering her ears in pain. Quite as suddenly as it burst, the sound stopped. Where the ice shell had once been there was a small strange ice bird animal. “My name is Sasaq.” the little thing said to Eva.

“W-whaaat?” Eva stammered in a soft tone of shock and surprise. ‘Something was alive from that icy chaos?’ She thought. Eva listened to the little spirit animal as it explained that it had been sent here to be Eva’s spirit companion.

“So you came to be my friend, but sent torturing death rains to try to kill me first?” Eva said with a hint of sarcastic weariness. She felt like she needed a long rest.

“Well, yes, that is part of the cycle of my birth. Many things must occur before I can be brought into this world.” Sasaq preened with what Eva thought were feathers but that floated a bit too aimlessly around the floofy to really be real feathers. ‘It’s probably a real animal that just wants the benefit of a wolverine friend in its life,’ she thought.

“If that is all true, then make that sizzling black rain of death go away!” Eva said to the floof spirit animal.

“It’s already gone or haven't you noticed?” Sasaq said calmly with patience of one who might be millions of years old. The thick floral scent seemed to get stronger as the bird wiggled more of its body.

“Hmmm…” Eva mused as she looked outside and realized the inky deadly globs were not falling and the ice from the trees had disappeared. Sighing deeply, she sat on her haunches for a brief rest. “Ok - well,” she suddenly yawned, “this seems like a good spot for a long rest.” Eva walked to the back of the ice cave and curled up. “You can stay if you’d like.” She looked at Sasaq with one eye and then fell asleep. 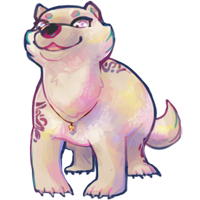 And that was just the beginning.

Eva Moir was a brave and energetic soul who had, in her 23 years of life, the misfortune of some terrible hardships that were woven with many wondrous opportunities. She wore her sandy blonde hair in a loose ponytail or bun, often with stray locks falling into her face, covering her chilled icy silver eyes.

Eva’s great grandmother is full blood Inuit, she married an Aleut man from an Aleut tribe who inhabit the Aleutian Islands. Eva's mother in turn married another man from the tribe of her father (though he was part Irish-Aleut). Eva’s first name means full of life -- or life. Her full name is Evalyn but she goes by Eva. Her last name means brave - mighty.

Eva loves her family and her Inuit people and worked hard at preserving her true nature while exploring the vast world around her. Her father was not part of her Inuit tribe so he often adorned her with special gifts from outside of the tribal traditions, like her favorite gilded pine cone necklace. He also introduced her to the world of tropical fruits, animals, and dry hot deserts when he took her on a great adventure to Central and South America for her 21st birthday, which was shortly after she graduated from University. Eva earned her undergraduate degree in Epidemiology with her study emphasis on zoonotic diseases. As much as she loved her studies, she missed exploring the wilderness of the Yukon backcountry, where her mother’s home was located, and the Aleutian islands, where her father’s home was. She opted to begin working from a lab in Anchorage Alaska while attending online studies in partnership with a private University towards earning her Masters degree in Zoonotic Epidemiological Studies. She concurrently studies philosophy, geology, and marine biology in an effort to also earn degrees in those fields as well.

One of her best friends is Elandra (which coincidentally means by the sea which Eva thought it was so strange that her best friend had a name that related to the ocean since she herself felt a strong bond with the sea. While still in their youth Eva and Elandra found another friend whose name is Denalia. Denali was to remain their close friend until she got really sick and eventually succumbed at the age of 15 to a horrible disease that nobody knew the name of. That really was the event that shoved Eva in the direction of studying epidemiology and disease.

The tattoos that Eva has on her body represent the spirit forms of ancestral lineage. On her shoulder is a puffin shaped tattoo which gives her protection from storms and bad weather. On her back ankle is a seal in the waves of the sea which represents innocence and protection at sea. Finally, cascading down Eva’s spine is a ripple of oceanic waves with a powerful polar bear emerging, which symbolizes courage, strength, and spiritual power.

Happily Ever After Sticker

Lacy Read Along Book and Cassette