Bugs Bunny has a minion!

What's Up, Doc? the Karak 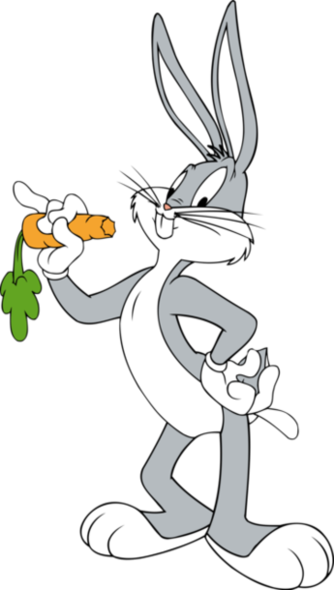 Bugs Bunny is an animated cartoon character. He is best known for his starring roles in the Looney Tunes and Merrie Melodies series of theatrical short films produced by Warner Bros. during the Golden Age of American Animation. His popularity during this era led to his becoming an American cultural icon, as well as a corporate mascot of the Warner Bros. company. He was voiced by Mel Blanc,

Bugs is an anthropomorphic gray hare, famous for his relaxed, passive personality, pronounced Mid-Atlantic accent (Blanc described the voice as being a mixture of Brooklyn and Bronx accents), depiction as a mischievous trickster, and his catchphrase "Eh, what's up, doc?" (usually said while chewing a carrot).

Since his official debut in 1940's A Wild Hare, Bugs has appeared in various short films, feature films, compilations, TV series, music records, comic books, video games, award shows, amusement park rides, and commercials. He has also appeared in more films (short and feature length) than any other cartoon character, is the ninth most-portrayed film personality in the world, and has his own star on the Hollywood Walk of Fame.

When TV Guide compiled a list of the 50 greatest cartoon characters of all time as part of the magazine's 50th anniversary in 2002, Bugs Bunny was given the honor of number 1. In a CNN broadcast, a TV Guide editor talked about the group that created the list. The editor also explained why Bugs pulled top billing: "His stock... has never gone down... Bugs is the best example...of the smart-aleck American comic. He not only is a great cartoon character, he's a great comedian. He was written well. He was drawn beautifully. He has thrilled and made many generations laugh. He is tops."

How To Play A Smart Joke